A few days ago was the KubeCon EU in Valencia, Spain. The moment to meet contributors who made what Falcosidekick is now was a really enjoyable time and I hope we'll do it again in the future. One week before, two new major versions of Falcosidekick and Falcosidekick-Ui were released. Let's see what's new.

Almost 10 months without a new release for Falcosidekick, the version 2.25.0, and what a huge release is. For curious people, the full changelog can be found here.

Each new release brings more outputs, thanks to the community. Here's the list of new ones:

With some CRD, you can now create reports in your Kubernetes clusters, the feature is often used for Security or Compliance, but anything is technically possible. For more details about how to use this output, read the documentation from @anushkamittal20 who implemented it for her project for Linux Foundation Mentorship Program.

The reports can also be displayed with Policy Reporter UI, created by @fjogeleit another member of the Falco community. 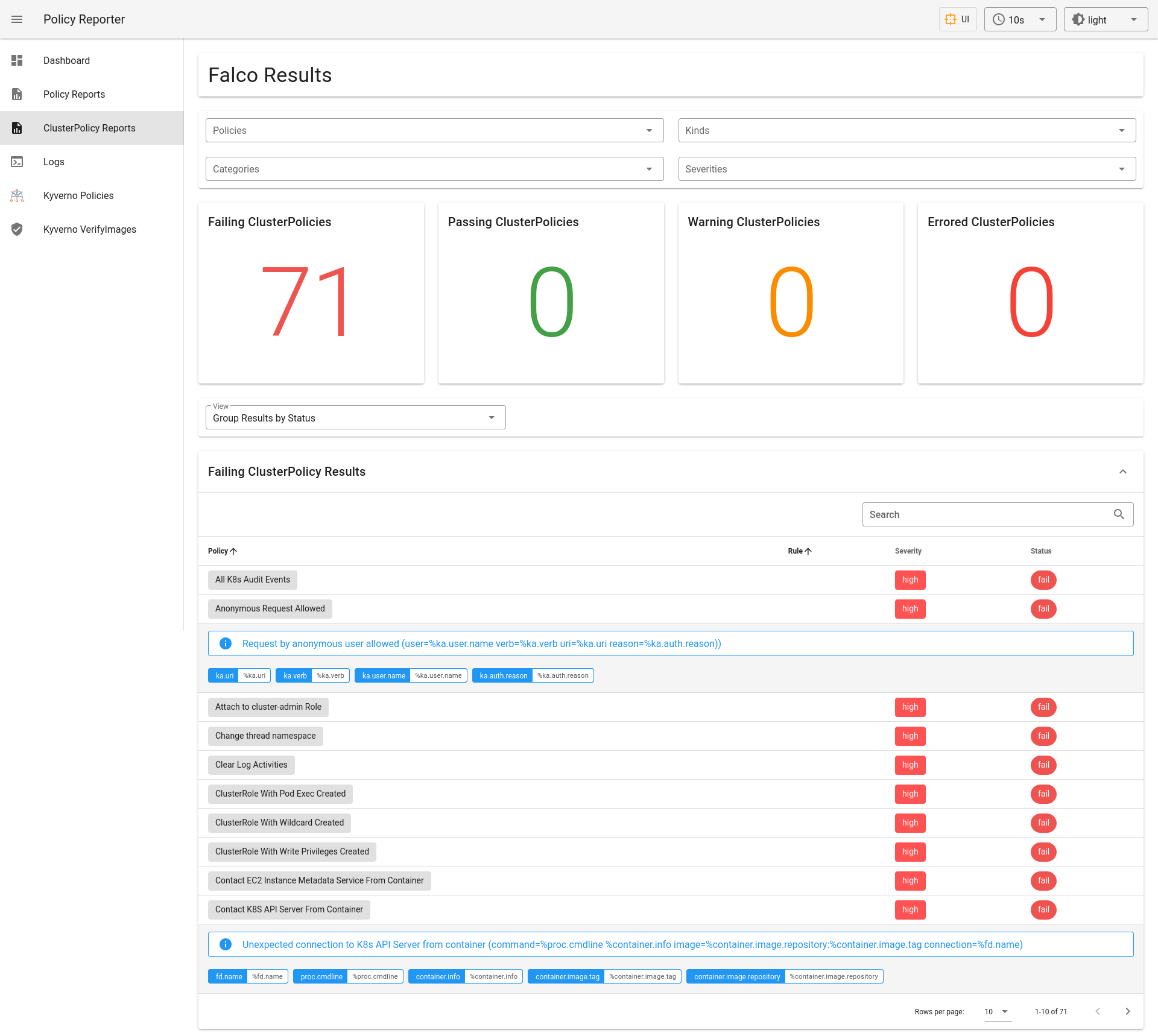 Years after its creation, Syslog remains a solid solution for managing the log files, especially if you're running Falcosidekick or else directly at the host level. With this new version, a Syslog server can be directly used as the target for the events, allowing you to send them in a secure place. Thanks to @bdluca.

Do you want to ingest thousands of events from Falco and be able to run data analysis on them? You can do so smoothly with the new AWS Kinesis output, bringing a new integration of Falco with AWS Ecosystem. We would be delighted to know any use case with analytics the community could create now. Thanks to @gauravgahlot.

Your DevOps/SRE/SecOps team uses Zoho Cliq for their communication? Allow them to receive nice notifications with this new output for Falcosidekick. Thanks to @averni.

Getting new features is nice, but we can also improve the existing ones, here's a list of major changes of this 2.25.0 release.

Until then, if you wanted binaries of Falcosidekick, you had to build them by yourself or use the provided Docker image. Now, each release will contain the compiled binaries for amd64 and arm64. The security is not forgotten, all artifacts are signed with Cosign.

In January, Falco 0.31.0 brought its new Plugin system, the source field of events becoming more important. This new release of Falcosidekick updates all the outputs to deal with source and tags events. Your Response Engines can now be much clever than even.

IRSA, aka Iam Role for Service Accounts, is the method provided by AWS for linking a Kubernetes Service Account with an IAM Role, allowing the Pod to easily use a Service. Falcosidekick is now able to use this mechanism for its outputs for AWS Services, no need to add Access and Secret Keys in your values.yaml. The UX is much better. Thanks to @VariableExp0rt.

I created the first version v0 of Falcosidekick-UI to have something more graphical for my talks, with the help of @fjogeleit we created a nice v1 that has been finally used more and more by people, becoming a famous product in the community. It was time to have a better version with some requested features:

All details to use this new version, v2.0.0, are described in the README. The Helm charts are already up to date, you can upgrade your deployments with: