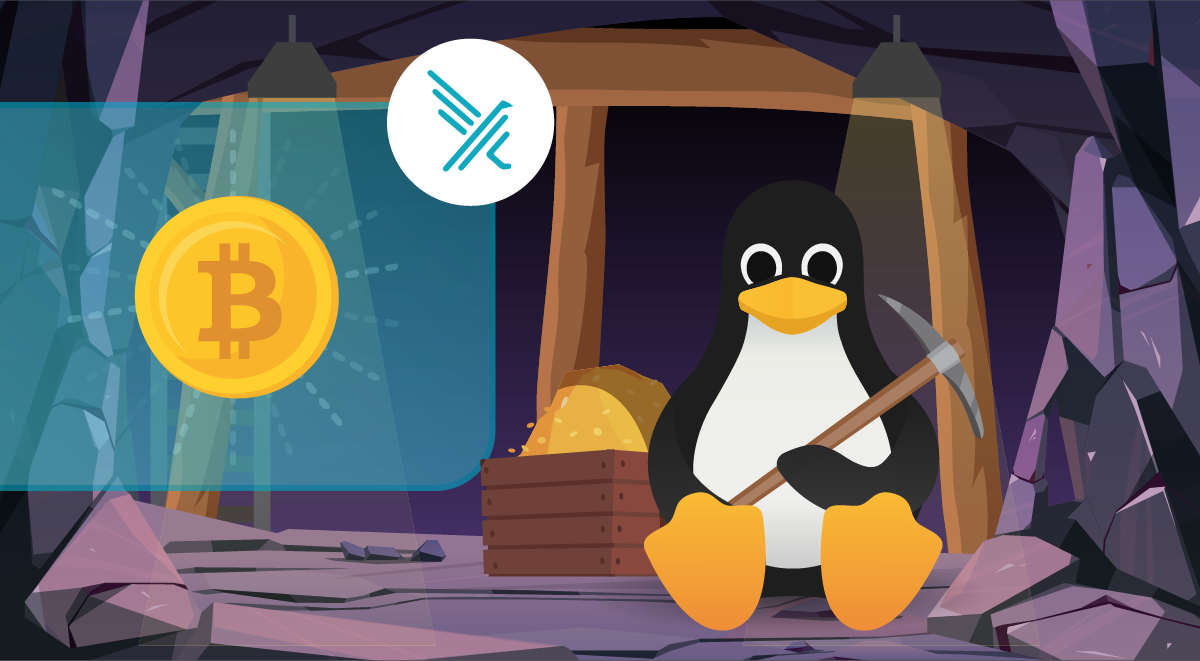 Cryptominers are programs that utilize computer resources to mine cryptocurrency. XMRig is an example of an open source cryptomining software designed for the sole purpose of mining cryptocurrencies, like Monero or Bitcoin. Cryptominers usually get rewarded with a token for every successful transaction mined, which makes cryptomining a profitable activity.

Whether the threat is from an external entity, or an insider, cybercriminals are most commonly abusing services such as Kubernetes and GitHub actions by infecting hosts and containers with cryptojackers and using the business resources to mine cryptocurrency on the attacker's behalf.

Assuming the cybercriminal has already compromised your environment and installed the XMRig miner, they will need to communicate with a cryptocurrency mining pool to distribute the resources by miner, share the processing power over a network, and split the reward equally, according to the amount of work they contributed to the probability of finding a block.

The mining pool is a collection of miners that work together to augment their chances of mining a block, sharing rewards among each other in proportion to the computing power contributed in successfully mining a block. There are lots of pools to choose from. You can find a list at miningpoolstats.stream/monero.

By default, Falco creates a list of all common pool domains used for Monero mining. The below YAML file shows how the list defines all domains as list items.

For the purpose of accuracy, we can define separate lists for HTTP domains as well as HTTPS domains.

Another list contains all port numbers that are commonly used by the cryptominer at the source.
There's no need for users to create the lists or macros. They are enabled by the default Falco rules.

Similar to the lists mentioned above, the following macros are already created. The macros define the ports used to connect to the mining domains - whether HTTP (unsecure) domains or HTTP/s (secure) domain names. The HTTP/s domain connects over port 443. Unencrypted HTTP connections are made over port 80.

Falco assigns all commonly used miner ports to the miner domains via the minerpool_other macro.

The final rule will aim to detect anything matching the condition described by the net_miner_pool macro, unless it's listed within the trusted_images_query_miner_domain_dns macro. Both macros are specified within the condition section of the completed Falco rule.

The rule is disabled by default. However, to enable this Falco rule you simply need to change the condition enabled: false to enabled: true.

The following macro is looking at any event type such as connections made or message data sent to the macros: minerpool_http, minerpool_https, or minerpool_other that were mentioned earlier in the blog.

Miners typically specify the mining pool to connect with a URI that begins with stratum+tcp. That's because Stratum is a line-based protocol using a plain TCP socket. The message payload is encoded as JSON-RPC. The protocol was designed specifically for mining operations. Therefore, it makes sense to detect scenarios where a client opens a TCP socket and writes requests using the Stratum protocol.
For more information on the new protocol designed for bitcoin mining, check out this link.

The following rule quickly shows how to detect the Stratum protocol. There's no need for any complex macros this time around. The already existing macro spawned_process watches for newly started processes, while the rest of the rule looks for a string on command, such as:

The spawned_process macro is easy to understand. It's basically just looking for the event types execve and/or execveat in any event directory.

The condition filters for webhook messages of type workflow_run that point to the execution of miners. github.workflow.has_miners is the main action to highlight. It fetches the workflow's definition file and scans it line by line, looking for patterns that identify the execution of one of the well-known miner binaries.

Within github.workflow.miners.type, we can specify one or more miners to be detected within the workflow definition file. This field contains the type of each detected miner as a comma separated list (e.g., XMRig, Stratum). Looking further into the miners.go file, we can see the exact list of miner binaries checked:

As you can see from the above list, it includes the strings for the crypto wallet, the crypto-mining pool, and the miners, such as xmrig and ccminer.

When the setuid or setgid bits are set for an application, this means that the application will run with the privileges of the owning user or group respectively. In the case of cryptojacking, the hacker will want to have root permissions over the running containerized workloads in order to install the XMRig binary. That's why it's important to detect setuid or setgid bits set via chmod.

Similar to the mining pool example, the rule is disabled by default. To enable it within the rule engine, simply change the enabled flag to enabled: true.

In Linux systems, processes can receive a variety of signals, such as SIGINT or SIGKILL.

The SIGINT signal is sent to a process by its controlling terminal when a user wishes to interrupt the process. This is typically initiated by pressing Ctrl-C, but on some systems, the "delete" character or "break" key can be used. The SIGKILL signal is sent to a process to cause it to terminate immediately (kill). If XMRig is run as root, but the SIGINT caller must also be running as root if the adversary plans on interrupting/pausing their operations to evade detection.

As mentioned at the beginning of this blog, Kubernetes is an ideal target for cryptojacking - hijacking of legitimate running workloads/applications. To detect when an XMRig binary is installed, we can apply drift detection to containers at runtime.

Generally speaking, attackers would look to install the XMRig miner in the /tmp directory. However, the above Falco rule will detect when executables are created in the container (regardless of the directory). From a forensics perspective, we will receive a Falco notification that tells us which executable was installed and to which directory.

We have provided multiple ways to detect the XMRig binary, whether that be through container drift when installing XMRig, outbound connections to mining pools coming from XMRig, or when file permissions are changed to root for XMRig.

The final rule, although not in the rules library by default, is to simply detect the XMRig binary outright - not based on behavior, just the binary name.

Leveraging lists and macros again, to detect the XMRig binary, security teams can manually specify XMRig and other relevant binaries in a malicious_binaries list, and place it within the in_malicious_binaries macro.

The above list provides more binaries than just ‘XMRig.’ As new miners become available, users can add those binaries to their malicious_binaries list.

The monetary gain of mining cryptocurrency is a motivation for threat actors to compromise the endpoints of unsuspecting users and use them for illegitimate mining activities.

The endpoints are usually part of a botnet that is being controlled by a Command and Control (C2) server. Aside from the rules listed above, Falco can also detect unwanted outbound connections to C2 servers, as well as other IoC's that could indicate a potential incident before the mining has begun.

The mode of initial access for threat actors may be through compromised SSH credentials or the exploitation of a vulnerability. Once the threat actor has gained remote access to the endpoints, the cryptomining software is executed on it. Being able to detect suspicious activity, such as Disallowed SSH connections on a Linux server, is critical for your incident response and forensics teams.