Today we announce the release of Falco 0.24 🥳

You can take a look at the huge set of changes here:

In case you just want to try out the stable Falco 0.24, you can install its packages following the usual process outlined in the docs:

Do you rather prefer using the docker images? No problem!

You can read more about running Falco with Docker in the docs.

In case you wanna grab statistics about your running Falco instance, be aware that this PR fixed and changed the name of the CLI flag you need to enable such feature. The flag is --stats-interval now and finally, it also works for values greater than 999 milliseconds.

Because of performance issues of the Falco gRPC Outputs API we went through an almost complete redesign of the gRPC server and the outputs RPCs.

Furthermore, we introduced a falco.outputs.service/sub gRPC method that behaves in the same way the old one was behaving, except that it is way faster than the old method.

Some months ago, a user reported a very high CPU usage when using Falco gRPC outputs API with Falco 0.21.

Profiling the code we discovered that the gRPC threads were keeping the CPUs very very busy. 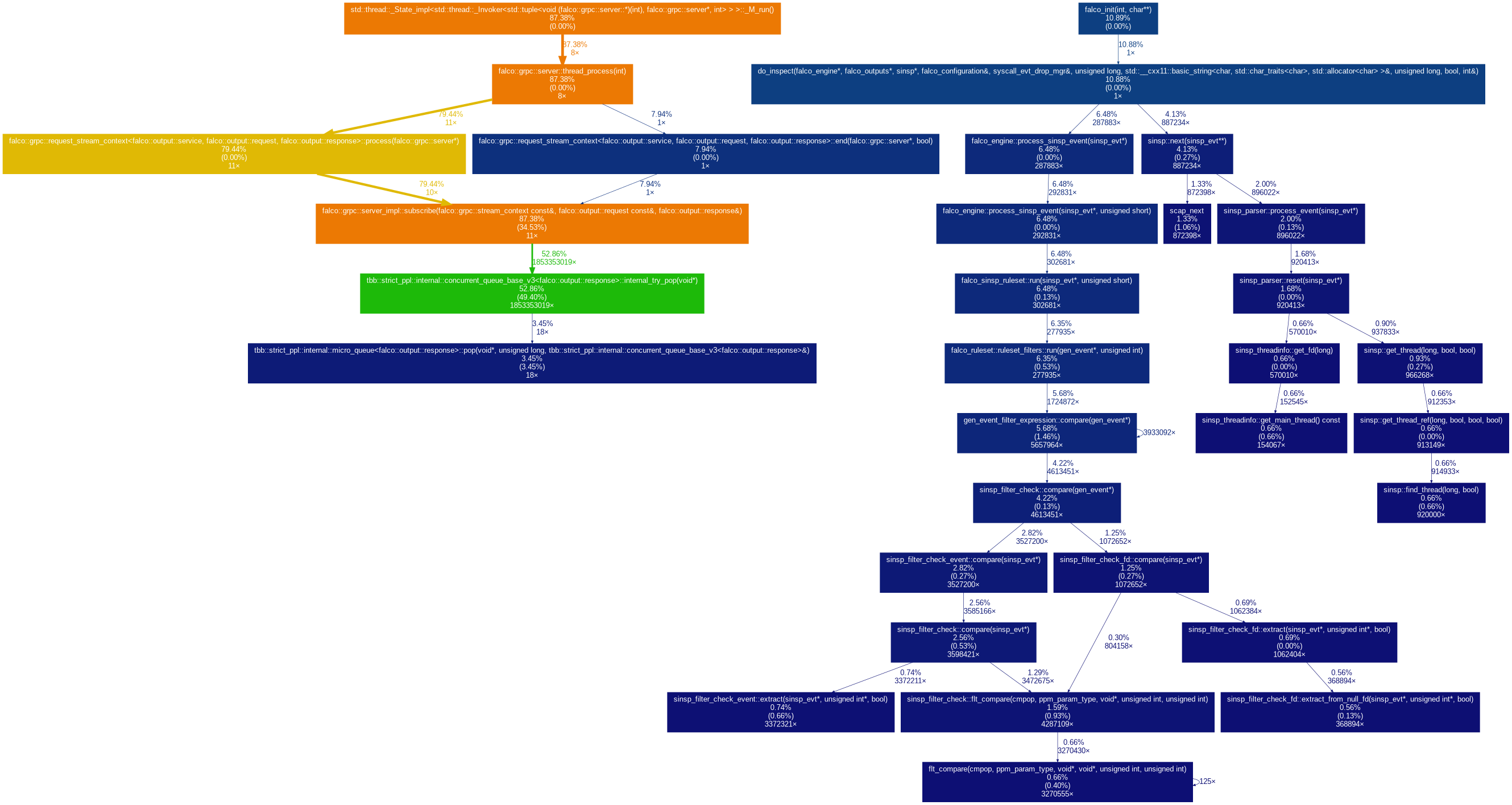 Digging deeply into the gRPC code and the gRPC core, Leo and Lore soon realized that to solve the issue a rewrite of important pieces of the Falco gRPC code was needed.

After some days of fine-tuning and continuous tests (4MLN requests towards the gRPC server, in 10 seconds) we’ve been able to reduce the CPUs occupancy of the gRPC outputs methods from nearly ~90% to values less than 20%. 🚀

In that PR you can find all the story, all the code changes, and also the instructions to quickly try out the new Falco gRPC output methods using grpcurl.

So, all’s well that ends well: users are now happy and we too! 🤗

Finally, now that Falco gRPC outputs are better, we want to advertise the community about two other important and gRPC related features that Falco 0.24 ships:

So, we’d invite all the Falco community and users to try out these new features and the improvements about gRPC!

Support for eBPF driver on CentOS 8 is back!

Since April some friends of our community reported issues on building the Falco eBPF driver on CentOS 8 (falco#1129).

After some intensive debugging sessions, Lorenzo and Leo discovered the cause: CentOS 8 backported process type functionalities (and relates structs) from Linux kernel 4.19 to 4.18 that made the driver checks ineffective.

Do you wanna look at some eBPF? Take a look at this PR!

Falco driver version 85c8895 contains the fix so that y’all can again run our beloved tool on your CentOS 8 boxes. 📦

Leonardo Grasso finally spotted a tricky typo that was causing buffered_output: false config option to do not work as expected.

Thanks to his fix, from now on Falco will promptly output its alerts on stdout when this option is disabled.

Also, we’d like to welcome Grasso in the family of Falco maintainers!

We are very thankful to Khaize for this huge PR that introduces a bunch of placeholder macros.

Thanks to his effort, users can now customize their own Falco rulesets more easily!

38 pull requests merged in, 29 of which containing changes directly targeting our end-users.

105 commits since past release, that was two months ago.

Be aware: userspace instrumentation is coming…

This functionality can be enabled by passing the -u flag when starting Falco, or using its long version - ie., --userspace.

A userspace implementation will also need to be implemented as well to take advantage of this contract.

The Falco community is currently working on an implementation called pdig which is built around ptrace(2) and seccomp. We are very excited to see pdig reach production support in the future.

See you in August with many more things!